Just a quick round-up, this month, I’m afraid! And yes, I’m a day late. I was at work until 10pm last night and although I planned to come home and do my usual monthly wittering, by the time I got back all I was capable of was sprawling on my sofa nodding off in front of Strike.

I knew this month was going to be busy and it lived up to expectations, that’s for sure. Oh, global pandemic aside, for once: we have not only moved house (and spent most of the month mired in packing, cleaning, and painting, as you do) but I have also, for the first time in forever, been properly inspired for my own writing.

It was also my birthday, and I got my beautiful birthday present – a fabulously bookish tattoo. It’s my biggest tattoo so far and I’m utterly in love. In case you don’t recognise it, it’s a moment from The Lord of the Rings, and a week on, I still can’t stop staring at it. 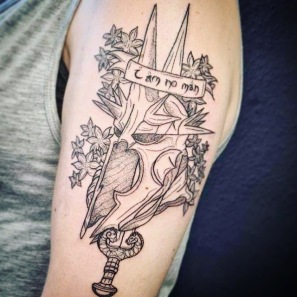 Reading has taken a bit of a backseat – as has my newly bookish Instagram. I think I’ve only posted on there six times in the last month which, for me, is quite notable.

But I managed something… I finished reading my 100th book of the year! 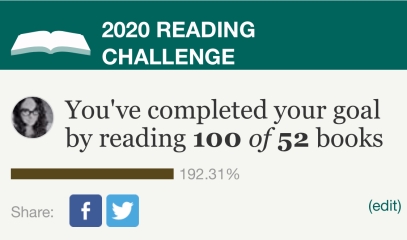 This month was fairly heavy on the non-fiction, for once, and for the most part the non-fiction was a lot more readable than the fiction. I very, very rarely write reviews on Goodreads (I like to save my opinions for on here) but I was moved to actually review a book on there this month. I’ll copy it in shortly but let’s just say it was, er, not favourable…

If we’re going to throw some stats in here, I read twelve new books this month and reread one, bringing my total up to a nice round 100. I’m rather proud of myself for that one – I set out to read 52 books this year and unless I accidentally lose function in most of my brain in the next four months, I’ll finish the year doubling that and then some. It’s by far the most I’ve ever read in a year without counting rereads; quite possibly even including rereads, seeing as I’m known to reread the same book repeatedly in the same year.

All but two of the books I’ve read this month have been digital – Kindle, BorrowBox or Audible. I’ve been so busy, I haven’t had the time to sit down properly with a pretty hardback; it’s been a case of snatched moments staring at my phone. I took a ‘TBR’ picture on Instagram at the start of the month and I’ll probably take the exact same photo later today for my September TBR, minus two books.

Anyway, on with the reviews!

I’ve been chopping and changing to come up with a favourite this month. But I’ve been decisive and I’ve made a call! 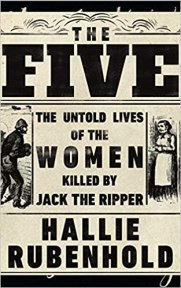 This has been on my reading list for ages and it certainly did not disappoint. When you think of serial killers, you probably think of Jack the Ripper – but do you think of his victims? What do you think of his victims? Prostitutes, right? In Victorian London, disposable. Hallie Rubenhold’s book examines the lives of the five generally confirmed victims of Jack the Ripper, giving them back the names taken from them as they have been reduced over the years to nothing but disembowelled bodies, luridly exploited in the name of ‘history’.

It’s a searing social commentary at the same time as being a detailed, eye-opening look at nineteenth century life for a woman, showing just how thin the line was between life and death even without a serial killer stalking the streets. This book is utterly gripping and even though I’ve been knackered this month, I couldn’t help staying up late to finish it. Historical non-fiction can be so dry and dreary, falling into just a big wordy list of facts – this is not one of those books. You feel as if you’ve been sucked into Victorian life to the point it’s quite surprising when you come back to modernity and realise you’re probably not about to be sent to a workhouse.

The moment that hits you in the gut the most: the list of personal effects found on each woman when her body was discovered. Equal parts fascinating, morbid and sad, it really brings home that these were normal women just desperately trying to scratch a life for themselves.

I Carried A Watermelon – Katy Brand 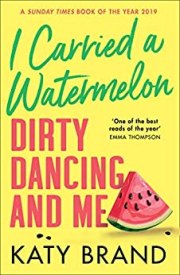 Hands down, I loved this book. Utterly loved it. Highbrow? Not bloody remotely. Part-memoir, part personal journey, part history of Dirty Dancing – what more could you want? Katy Brand is a comedian and writes in a  lighthearted yet informative tone about her favourite film – ‘favourite’ to the point of real obsession, and the book is only made better for it.

Ultimately this is an homage to the film, and you should probably already be a fan of it before reading – which I was, though I hadn’t seen it for a long time. I immediately went back and watched it, of course, through new eyes, and realised how well it holds up, even long past my teenage years of going all moon-eyed over Patrick Swayze. I devoured this book in a matter of hours and I’m already looking forward to rereading it next time I fancy watching Dirty Dancing. 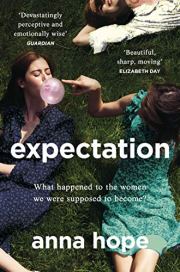 This is one of those books that I hope won’t get dismissed as just ‘chick lit’. It’s a story about female friendship, about growing up and moving on and your life just not turning out how you planned. Anna Hope writes beautifully, and if her characters err a tiny bit on the stereotypical side, it doesn’t take away from her razor-sharp commentary on a generation of women (my generation) and the way their lives have been shaped by the modern world. Her depiction of motherhood and marriage in particular struck a chord with me, honing right in on my own old insecurities and the gut-wrenching panic of life as a lonely mother of a newborn. 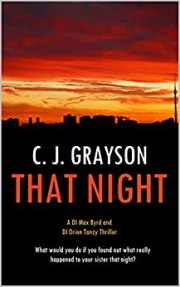 Here you go. This is the book that moved me to write my first actual Goodreads review of the year. I’d had this recommended to me as the author is local and the book itself is set where I currently live. I’m always keen to support a local indie, so I bought it. And… I rather wish I hadn’t. Indie authors have a terrible reputation for poorly edited, indulgent rubbish, and as I’m an indie author myself, I want to disparage that stereotype as much as possible. But in this case… I’m just going to copy what I put on Goodreads because it says it all, really.

“I really wanted to enjoy this – I will always jump to support a local indie author. But, I’m sorry, this author is in desperate need of an editor. A potentially strong plot was derailed by poor characterisation, clichés, and some truly unforgivable spelling and grammar errors.

I did enjoy the depth and detail of the crime scenes, and there is definite creativity in the plot. I would perhaps be happy to watch a TV show with a script written by this author, but I won’t be reading anything else until a decent editor gets their hands on his material.”

To further add: the author is clearly a car fan because every vehicle in the story is lovingly described down to the last boring detail, and quite possibly a low-key misogynist (the descriptions of women, particularly dead ones, made me physically cringe). Also, his characters, male and female, have a terrible habit of bursting into hysterical screams at every opportunity – I’ve literally never read a book in which the word ‘scream’ was used so many times. I could go on but life is far too short.

And just the one reread…

Right then, what’s next? September is an exciting month for books – there are two coming out in the next couple of weeks that I’ve been waiting for. A new Robert Galbraith (JK Rowling) and a new Caitlin Moran; how fabulous! Plus I’ve got last month’s TBR pile to get through, when I get chance.

Plus, my three-year-old is finally going back to nursery. I’LL ACTUALLY HAVE TIME TO MYSELF AGAIN! Am I counting the hours? Potentially.

Another thing I’ve been pondering – with the new Stephenie Meyer book out a few weeks ago, I’ve been considering doing a full Twilight Saga reread and blogging my thoughts. I was a bit of a fan when I was younger, before I properly discovered feminism, and it’s been a good ten years since I picked up one of the books. What do you think – should I do it? And more importantly, should I be drinking heavily while I do so? Because I don’t think I’ll be able to tackle that bit of teenage nostalgia without alcohol…

Anyway, I’ll be off now to play with my brand-new Henry Hoover (the things that excite you when you’re over thirty) and perhaps unpack another couple of boxes from the garage. This new house is becoming a home, and I love it. And so does Teddy! 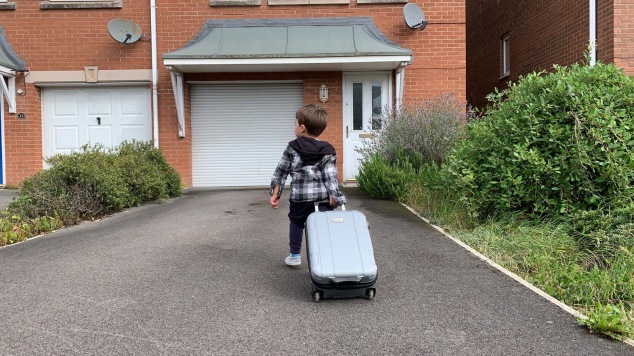